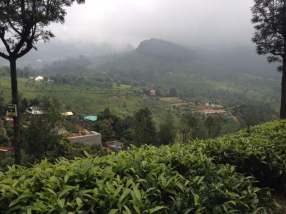 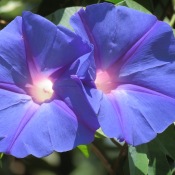 It is 15°C and feels really nice. We are about 7000 feet above sea level, and it took us 100 kms to get here in about 4 hours. The roads were windy, making us giddy, also because we had chosen to start early, at around 4:30 AM, to beat the Sunday traffic, see the magnificence of the sun rise, and perhaps catch some mountain mist and bisons during the ascend. It was indeed nice upon arrival, the pleasant breeze, the radiance of the tea plantations over the rolling hills, bunch of houses stacked next to each other in cozy patterns of amoebic forms, and the unusually gentle intensity of the sun at that height, making it a memorable ensemble in this present moment, to experience the elemental nature of existence. It does get crowded at this “hill station”, a word perhaps borrowed from the British during their forced occupation, but nonetheless, the cooler climate makes it all worthwhile, considering the plains where we live has already started blazing at 36°C, and its only early April, the sun having just crossed the equator in its rhythmic ascend towards the Tropic of Cancer. The Northern hemisphere is going to receive a lot of sun in the next three months, and the temperatures have been soaring, particularly over the past decade, and it probably will reach the early 40’s°C by late May, where we stay. The one day impromptu trip to the hill station turned out to be a benediction worth noting for a long time to come. Just escaping to a 20°C drop in temperature, can put perspectives in order, and today was one of those significant days.
Any impromptu trip, which does not involve a planned assortment of “masala chai”, sandwiches lapped with pesto and tomatoes, and alternated with peanut butter, is probably going to face many challenges in its successful outcome, and neither of us four were known for such dorky mistakes. It meant getting up really early, to get things rolling, and it was not like we were trying to get up early to do yoga, in the auspicious “brahmamurath” (3:45 AM till sunrise, when the human system is in sync with the solar system), it was an impromptu day off, and it seemed quite easy to get up, shower, get the sandwiches rolling, bottle filled with filtered drinking water, thermos filled with masala chai, get the dishes cleaned, relevant oil lamps lit, decent clothes ironed, watermelon packed, bed cover spread appropriately, and get out of the cottage, at the appointed hour. It seemed ridiculous to be hitting the snooze button of the alarm, considering we woke up three minutes prior to the usually annoying buzzing of the alarm clock.

Impromptu holidays have a charm on the human mechanism, which can even awaken the nocturnal amongst us, to be pleasantly awake at the unearthliest hours of the morning.

We drove through the town, ensuring the pizzeria we wanted to have lunch at, still existed, and the owners and staff had the equal pleasure of our company, as we would have of their pizza and services, only after ensuring that the sandwiches and masala chai were savored affectionately, much before reaching the center of the town. It was only 9 AM and the town seemed buzzing with tourists from all over the country, attempting to escape the heat, and we were left feeling silly, that we weren’t the only clever folks who used such escape strategies. But, we had the territorial advantage of being from a nearby region, and knew the places which would be less crowded for our next move – a relaxed picnic in a meadow like setup, nearby the eucalyptus trees. We intended to relax, and we were not stressed about it by any means. It took another half an hour of driving up and down the windy streets, a few stops to take several selfies with the lavender-colored flowering trees along the rolling hills, and finally found a secluded spot, undisturbed by fellow brethren, surrounded by tall eucalyptus trees and pretty clean patch of decently and naturally mowed grass – our private meadow. It was the nearest resemblance to a meadow and we were not going to pass it by. We quickly cleared the trunk, picked up the nonalcoholic liquids, remaining sandwiches before the afternoon lunch, spread the cover, and before we could count ‘em ten sheep, I in particular was told to have disappeared in a dreamy state, with my favorite afternoon siesta, which lately I’ve been referring to as a “power nap” – some strange lingo I must have picked up, perhaps, during my corporate “hamstering” days.

It turned out to be an absolutely pleasant siesta, followed by significantly insignificant blabbers, random doses of laughter and giggles, sharing of stories, taking some selfies and some selfless photos, and simply being with friends for no particular reason, at this lovely  spot, on a rolling hill, somewhere in the western ghats of southern India.

It was not like we spent a lot of time together, or drove the distance only to gobble some pizza, with any serious planning for spending a day out away from routine work and blistering heat. It was a simple and impromptu holiday, mostly unplanned and giggly, going with the flow, keeping it light and fun, amongst friends, with some deliberately greasy and delicious choices of platter. We also managed to reach the pizzeria on time, ordered the sumptuous pizza, along with some pasta, gobbled them down along with continual laughs, and the pleasure to be amongst friends on a holiday, away from the 36°C plains weather, and submerging ourselves to the rosy 15°C weather for one day. Cheers to more impromptu holidays, time well spent with friends, relaxed and leisure moments in nature, and remembering that the softer and subtler moments in life, provides an immediate opportunity to experience the profoundness of life, which in itself is a fleeting and ending experience! 🙂